Can you allow yourself to dream of a world system that works for everyone?  These videos illustrate the transforming principles and prospective institutions that could make global democracy a reality.  Activists join to propose advanced alternatives to meeting the needs of all earth’s people.  They offer guidance on how world citizens can share power with corporations and national governments to control more of the destiny of the race.

This Course on Transforming Planetary Management offers a Local Action option.  It is an interactivating study program.  Participants review UN history and potentials, so they can understand why each of 25 Top Transformations of the world system offers a real solution to a given set of problems that populations are experiencing globally.

By means of these seminars, advocates of working toward democratic world federation can interface their agenda with local schools and civil society groups.  The students bring new blood to non-governmental organizations.  Member adults and seniors have resources, know-how, and contacts that will enormously benefit youth just starting their careers.

Course attendees have a chance to choose to engage with companionable others to undertake local projects.  The desirable principles of good governance, inclusive social justice, and human rights maximization apply everywhere.

These affinity action teams might decide, for example, to work to bring greater sustainability to campus management, assist community development projects, press their national governments to support a Green Economy, or lobby UN missions to back weighted voting in the General Assembly and universal regional representation in the Security Council. Action Agenda for the Earth:
Strengthening the United Nations for the 21st Century, Abridged
(57 mins.  total)

The historic Millennium Forum, convened by the United Nations Secretary General at the General Assembly Hall in May 2000, legitimately represented organized humanity.  The delegates produced a Declaration and Agenda for Action that proposes an inclusive, fair, and actionable alternative to the current form of economic globalization.  This plan shows how to restore the environment, while bringing about a world of peace and plenty for all.

I. Transforming the United Nations
Four authorities picture a world system that works for all.  They explain how to find U.N. agencies, guarantee every person food, shelter, health care, education, and employment, and institute a comprehensive peace-sustain U.N. system to reduce armed conflict. (14:00)

II. The Other Superpower Convenes
In May 2000 at the United Nations, civil society delegates from around the globe gathered to represent humankind.  They produced an Agenda for Action recommending workable ways that governments, the U.N., and civic organizations cat together fulfill the commitments all states have made to meet the needs of their populations and restore the biosphere.  Folk music and dance performances reflected the planet’s many cultures. (12:00)

IV. Funding and Democratizing the United Nations
A small levy on transborder currency exchange transactions would fund the U.N. to serve as an effective Earth steward. Instituting user fees on the global commons can finance sustainable development and environmental restoration.  To democratize the U.N., the delegates recommended establishing a Global Civil Society Forum to define a People’ Agenda and focalize world attention on implementing it. (12:00) Toward a Governed World
Three articulate globalists explain how to move from the present unruly international system toward orderly planetary management. (30:00)

Nine Weeks for the Earth
Reconnect to your highest ideals through this commemoration of the period between the 25th Earth Day and the 50th Anniversary of signing the U.N. Charter. (16:00)

The Challenge of World Citizenship
World Citizens call for a People’s House in a stronger and better financed United Nations. (18:00) 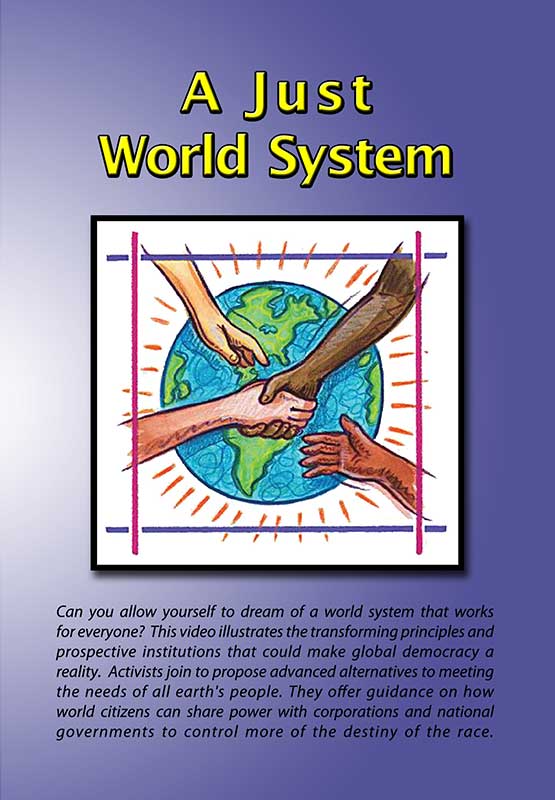 A FREE 9 min. 30. second version is available at the rental link above by simply clicking ‘Watch The Trailer”.

Could you allow yourself to dream of a world system that works for everyone?  This 22 minute video illustrates the transforming principles and prospective institutions that would make global democracy a reality.  Activists join to propose realizable ways to meet the needs of all earth’s people.  They detail infrastructure world citizens need to promote to share power with corporations and national governments in order to shape more of the destiny of the race.

Until recently, few were on the Internet most of us now use every day.  These developments can likewise happen very rapidly.  Let us visualize together a world where everyone has enough to eat and work to live.  We can do it easily, with a small portion of the money now going to the military.

We could declare for the transformation of the United Nations into a world federation of nations: democratic, transparent, and plural.  We are all human, and we are all earthlings.   But we have no structure that admits those simple facts – yet.  Let us join together in a new “Dance of the Earth.”

In the meantime, you can check out David’s entire body of work and his current projects at his two websites worldcitizenvideobooks.com and transformationaledu.org.  These will link you to his YouTube channel, where you can watch a few shorts. 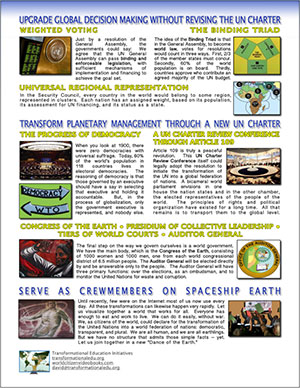 Securely funded UN or allied agencies could carry out a constellation of world service functions.  Short video segments illustrate many of these proposals, making the ideas easier to envision.  All these planned institutions have identified appropriate reliable non-donation funding sources.

— Enhance conflict resolution through a non-violent civilian peace force,
emphasizing the participation of local women in peace settlement negotiations.
— Enlarge mediation and conciliation services.
— Form an all-volunteer rapid deployment Emergency Peace Service and
designate standby regional peacekeeping forces.
— Create a corps of police officers to work with peacekeepers.
— Regularize the functioning of the Peacebuilding Commission to help
societies recover from violent conflicts.
— Develop a global peace education curriculum and secure its use in all schools.
•  Institute universal jurisdiction for the International Criminal Court (ICC).
•  Declare wars of aggression illegal through the ICC, enforced at least by lifetime
travel restrictions for fear of prosecution on heads of state that authorize crimes
against the peace.
•  Stem nuclear proliferation by having current nuclear states de-alert all their
nuclear weapons.

•  Operationalize the Universal Declaration of Human Rights.
— When necessary, act from collective responsibility to protect civilian populations
from intolerable abuse by their own governments.
•  Systematize tiers of courts, most already in place, working with the watchdog
Human Rights Council, to guarantee the maintenance of civil standards in
practice, everywhere, at all levels, from the local, through the national, regional,
and now with the ICC, to the global.